Social media and the age of disconnectedness 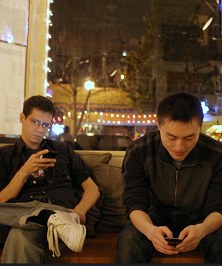 One of the paradoxes of our age today is that we are more connected than ever with each other through our screens, but more disconnected than ever in real life. As cultural analyst Sherry Turkle points out in a TED talk, we are settling for mere connection though our digital devices instead of real life communication with those around us.

Social media and our smartphones have given us the ability to stay connected with whoever we want to, whenever we want to. A friend of mine recently took a six month trip to Australia and my friends and I were able to talk with him almost every single day via Facebook. It was no different than if he were back home, living in the same town as most of us. This level of connection was unheard of before the age of smartphones and social media.

As we continue to progress into the age of social media and smartphones, the line between our real life and our online life is becoming increasingly blurred. Look no further than online dating, where the rise of popular dating apps such as Tinder have dramatically altered the landscape of dating life, particularly among twenty-somethings, by turning the challenge of finding a partner into a speed-dating game.

A growing body of research suggests that social media can have negative effects on mental health, often leading to a fear of missing out, or FOMO, as it is colloquially known. Most of us, not just Millennials, are probably guilty of checking our phone during a social outing to see what we might be missing. Social media can also negatively impact our mental health by inviting unhealthy and unrealistic comparisons with others based on their social media lives, which is typically an inaccurate portrayal of their real life.

Perhaps an important question we should all stop to ponder is this: are our smartphones and social media accounts leading to more connection or more interruption in our lives? As we continue to progress into the digital age where digital behemoths such as Amazon, Facebook and Google vie for more and more control of our lives, it is important that going forward, we stop to consider what role we would like our smartphones and social media to play in our life, and how much control we afford them.