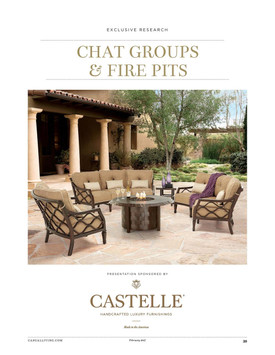 Nearly two-thirds of consumers answering Casual Living’s 2017 exclusive survey own conversation sets. The most popular piece in chat sets are chairs, with 81% of consumers saying chairs are a part of their conversation set. Sixty-five percent have coffee, cocktail or end tables, and 45% have sofas in their sets.

Casual Living fielded an online consumer survey in December 2016. The survey, asking about conversation sets and fire pits, garnered responses from a representative sample of 496 consumers who have outdoor living areas.