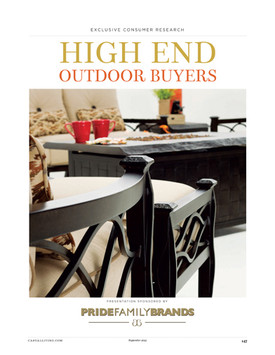 The affluent accounted for 19% of all households buying a conversation or chat group last year and a remarkable 65% of the total dollars at retail for the product. With dining sets, affluent households comprised 28% of total buyers and 37% of the total dollars spent. Affluent households are defined as having incomes of $100,000 or more. Twenty-two percent of U.S. households, 27.6 million, fall into this designation. The reason affluent households account for a greater percentage of the dollars spent is very simple. They spend more money. The data in this exclusive presentation derived from two consumer surveys. The first is Casual Living's 2015 Consumer Buying Trends Survey, a nationally representative survey of 2,500 U.S. households. The data reveals 2014 shopping and buying incidence levels for conversation/chat groups and outdoor dining sets. Because of the sample size and a respondent profile closely matching the demographics of all U.S. households, survey data can be projected nationally with a margin of error of plus or minus 2%. Other data is from Casual Living and New York-based Apartment Therapy's Outdoor Decorating Survey, which received responses of 400 consumers. Readers of the online decorating source were queried about outdoor spaces in 2014.