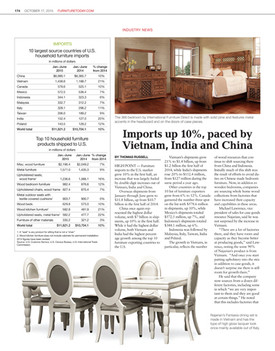 Originally published in the October 17, 2015 print issue of Furniture/Today

Furniture imports to the U.S. market grew 10% in the first half, an increase that was largely fueled by double-digit increases out of Vietnam, India and China. Overseas shipments from January through June grew to $11.8 billion, up from $10.7 billion in the first half of 2014. China once again represented the highest dollar volume, with $7 billion in shipments, up 10% in the first half. While it had the highest dollar volume, both Vietnam and India had the highest percentage growth among the top 10 furniture exporting countries to the U.S. Data is based on the dollar values declared by importers and exporters to the U.S. Customs Service. The figures are coded according to the Harmonized Tariff Schedule and made available to Furniture Today by the U.S. Census Bureau, U.S. International Trade Commission and the U.S. Customs Service.