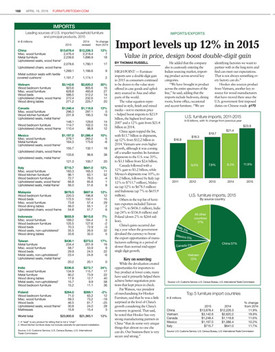 Originally published in the April 16, 16 print issue of Furniture Today

Furniture imports saw a double-digit gain in 2015 as consumers continued to be drawn to the value story offered in case goods and upholstery sourced in Asia and other parts of the world.

Furniture/Today’s 2016 Imports/Exports report presents calendar year 2015 shipments data. The figures are coded according to the Harmonized Tariff Schedule and made available to Furniture Today by the U.S. Census Bureau, U.S. International Trade Commission and the U.S. Customs Service.