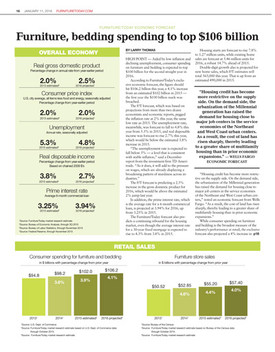 Originally printed in the January 11, 2016 print issue of Furniture/Today

Aided by low inflation and declining unemployment, consumer spending on furniture and bedding is expected to top $100 billion for the second straight year in 2016.

According to Furniture/Today's exclusive economic forecast, the figure should hit $106.2 billion this year, a 4.1% increase from an estimated $102 billion in 2015 — the first year the $100 billion mark was breached.