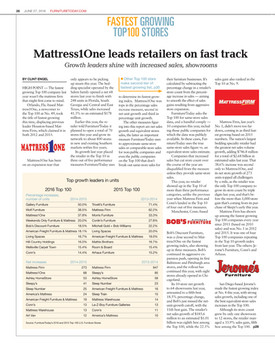 Originally published in the June 27, 2016 issue of Furniture Today

The fastest growing Top 100 company last year wasn’t the mattress firm that might first come to mind. Orlando, Fla.-based Mattress1One, a newcomer to the Top 100 at No. 49, took the title of fastest growing this time, displacing previous leader Houston-based Mattress Firm, which claimed it in both 2012 and 2015.

Mattress1One has been on an expansion tear that only appears to be picking up steam this year. The bedding specialist operated by the Salem family opened a net 68 stores last year to finish with 248 units in Florida, South Georgia and Central and East Texas, while sales increased 41.3% to an estimated $178 million.

About the data: Furniture/Today’s exclusive report spotlighting the fastest-growing furniture stores is based on the 2016 and 2015 surveys of Top U.S. Furniture Stores that appeared in the May 16, 2016, and May 18, 2015, issues.

Sales of furniture, bedding and decorative accessories were used in determining the sales growth leaders, rather than total store revenues. Here’s a list of companies featured in the 2016 report, with this year’s Top 100 rank.