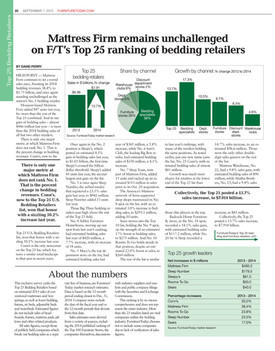 Originally published in the September 7, 2015 print issue of Furniture Today

Mattress Firm continues to set a torrid sales pace, boosting its 2014 bedding revenues 38.4% to $1.75 billion, and once again standing unchallenged as the nation's No. 1 bedding retailer. Houston-based Mattress Firm added 847 units last year, far more than the rest of the Top 25 combined. And its net gain of bedding sales ?? almost $486 million last year ?? is more than the 2014 bedding sales of all but two other retailers. There is only one major metric at which Mattress Firm does not rank No. 1. That is the percent change in bedding revenues. Conn's, new to the Top 25 U.S. Bedding Retailers list, won that honor with a sizzling 50.2% increase last year. This exclusive survey ranks the Top 25 Bedding Retailers based on estimated 2014 sales of conventional mattresses and box springs, as well as foam bedding, futons, air beds, adjustable beds and waterbeds. Estimated figures do not include sales of headboards, frames, mattress pads, pillows and other related products. All sales figures, except those of publicly held companies which break out bedding sales as a separate line of business, are Furniture/Today market research estimates. Data is based on the 12-month period ending closest to Dec. 31, 2014. Company notes include the date of the fiscal year end or the 12-month periods that deviate from that date. Sales estimates were derived from a variety of sources, including the 2014 published ranking of the Top 100 Furniture Stores, the companies themselves, discussions with industry suppliers and analysts and public company filings with the Securities and Exchange Commission. This ranking is by no means comprehensive and does not represent the entire industry. More than the 25 retailers listed are vital companies within the bedding industry. Furniture/Today chooses not to include some companies due to lack of verification of sales figures.