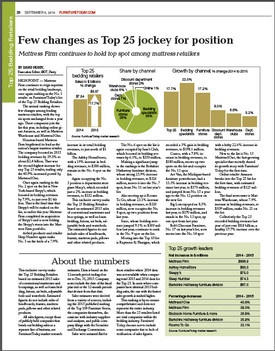 Originally published in the September 5, 2016 print issue of Furniture Today

Mattress Firm continues to reign supreme on the retail bedding landscape, once again ranking as the No. 1 retailer on Furniture/Today’s list of the Top 25 Bedding Retailers.

The annual ranking shows few changes among leading mattress retailers, with the top six spots unchanged from a year ago. Three companies join the list this year, including online giant Amazon, as well as Mattress Warehouse and Mattress1One.

Houston-based Mattress Firm lengthened its lead as the nation’s largest mattress retailer. The company boosted its 2015 bedding revenues by 39.3% to about $2.4 billion. That was the second-highest increase for any Top 25 retailer, trailing only the 40.9% increased posted by Mattress1One.

Once again ranking in the No. 2 spot on the list is New York-based Sleepy’s.

About the Numbers:  This exclusive survey ranks the Top 25 Bedding Retailers based on estimated 2015 sales of conventional mattresses and boxsprings, as well as foam bedding, futons, air beds, adjustable beds and waterbeds. Estimated figures do not include sales of headboards, frames, mattress pads, pillows and other related products.

All sales figures, except those of publicly held companies that break out bedding sales as a separate line of business, are Furniture/Today market research estimates. Data is based on the 12-month period ending closest to Dec. 31, 2015. Company notes include the date of the fiscal year end or the 12-month periods that deviate from that date.

Sales estimates were derived from a variety of sources, including the 2015 published ranking of the Top 100 Furniture Stores, the companies themselves, discussions with industry suppliers and analysts, and public company filings with the Securities and Exchange Commission.

Sales were assumed flat for those retailers where 2014 data was not available when comparing total 2015 and 2014 data for the Top 25. In cases where companies have identical 2015 bedding sales, the one with the fastest sales growth is ranked higher.

This ranking is by no means comprehensive and does not represent the entire industry. More than the 25 retailers listed are vital companies within the bedding industry. Furniture/Today chooses not to include some companies due to lack of verification of sales figures.