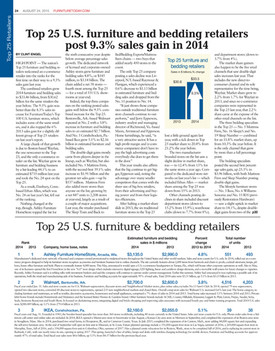 This report originally published in the August 24, 2015 print issue of Furniture/Today.

The nation's Top 25 furniture and bedding retailers welcomed an e-commerce retailer into the ranks for the first time on their way to a 9.3% sales gain last year.

The combined retailers grew 2014 furniture and bedding sales to $33.46 billion, from $30.62 billion for the same retailers the year before. The 9.3% gain was better than the 8.3% sales increase for Furniture/Today's Top 100 U.S. furniture stores, which includes some of the same retailers, and it also topped the 6% 2013 sales gain for a slightly different group of Top 25 retailers on last year's report.

All sales figures, except those of publicly held companies which break out furniture and bedding sales as a separate line of business, are Furniture/Today market research estimates.

Sales estimates were derived from a variety of sources, including the companies themselves, public company filings with the Securities and Exchange Commission, discussions with industry analysts and suppliers and published and unpublished reports, including newspaper articles in various retailing areas.

This ranking is by no means comprehensive and does not represent the entire industry. More than the 25 retailers listed are vital companies within the industry. Furniture/ Today chooses not to include some companies due to lack of verification of sales figures.