GDA Trends and Forecast for 2015 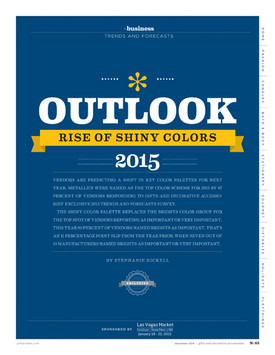 GDA Trends and Forecast for 2015

* Originally appeared in the December 2014 print edition of GDA *

Vendors are predicting a shift in key color palettes for next year. Metallics were named as the top color scheme for 2015 by 67% of vendors responding to Gifts and Decorative Accessories’ Exclusive 2015 Trends and Forecasts Survey.

That’s an 11 percentage point slip from the year prior, when seven out of 10 manufacturers named brights as important or very important.

* This material may not be published, broadcast, rewritten or redistributed in whole or part without the express written permission of Progressive Business Media.*