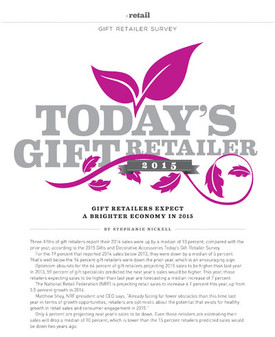 Three-fifths of gift retailers report their 2014 sales were up by a median of 10 percent, compared with the prior year, according to the 2015 Gifts and Decorative Accessories Today's Gift Retailer Survey.

For the 19 percent that reported 2014 sales below 2013, they were down by a median of 5 percent. That's well below the 14 percent gift retailers were down the prior year, which is an encouraging sign.

This year's exclusive survey results, collected during February and March, are based on the responses of 150 stores.