HFN State of the Industry for 2012 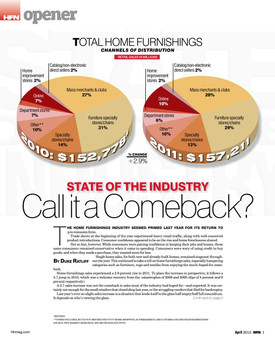 HFN State of the Industry for 2012

Originally published in the April 2012 issue of HFN

The home furnishings industry seemed primed last year for its return to pre-recession form. Trade shows at the beginning of the year experienced heavy retail traffic, along with well-conceived product introductions. Consumer confidence appeared to be on the rise and home foreclosures slowed. Not so fast, however. While consumers were gaining confidence in keeping their jobs and homes, those same consumers remained conservative when it came to spending. Consumers were wary of using credit to buy goods, and when they made a purchase, they wanted more for  less. Single home sales, for both new and already-built homes, remained stagnant throughout the year. This continued to take a toll on home furnishings sales, especially hampering categories such as furniture, rugs and textiles from enjoying the much-hoped-for comeback.

Home furnishings sales experienced a 2.9 percent rise in 2011. To place the increase in perspective, it follows a 4.7 jump in 2010, which was a welcome recovery from the catastrophes of 2008 and 2009 (dips of 4 percent and 9 percent respectively). A 2.7 sales increase was not the comeback in sales most of the industry had hoped for—and expected. It was certainly not enough for the small retailers that closed shop last year, or the struggling vendors that filed for bankruptcy. Last year’s ever-so-slight sales increase is a situation that lends itself to the glass half empty/half full conundrum. It depends on who’s viewing the glass.

The data in HFN’s State of the Industry is based on information supplied by key vendors in individual product classifications, usually market leaders in a position to know the overall trends within their categories. HFN no longer surveys a broad cross-section of suppliers due to their lack of cooperation. Third party resources are used where appropriate, especially in furniture where research from Mann, Armistead & Epperson Ltd. was extremely helpful. Finally, HFN editors, closest to the businesses they report on, develop the final numbers, which are considered estimates with a plus or minus factor of five percent.