HFN State of the Industry for 2015 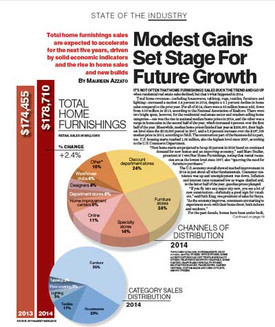 HFN State of the Industry for 2015

Originally printed in the September 2015 print issue of HFN

It's not often that home furnishings sales buck the trend and go up when residential real estate sales declined, but that's what happened in 2014.

Total home revenues—including housewares, tabletop, rugs, textiles, furniture and lighting—increased a modest 2.4 percent in 2014, despite a 3.1 percent decline in home sales compared to the prior year. For all of 2014, there were 4.93 million homes sold, down from 5.09 million in 2013, according to the National Association of Realtors.

HFN's exclusive State of the Industry report provides estimated 2014 and 2013 retail sales and distribution channel data for home furnishings, including the categories of housewares, tabletop, floor coverings, lighting, textiles and furniture. All data is based on estimated U.S. retail sales figures.