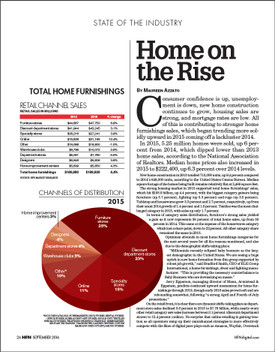 Originally printed in the September 2016 print issue of HFN

Consumer confidence is up, unemployment is down, new home construction continues to grow, housing sales are strong, and mortgage rates are low. All of this is contributing to stronger home furnishings sales, which began trending more solidly upward in 2015 coming off a lackluster 2014.

The strong housing market in 2015 supported total home furnishings’ sales, which hit $188.9 billion, up 4.4 percent, with the biggest category gainers being furniture (up 5.7 percent), lighting (up 5.3 percent) and rugs (up 3.8 percent). Tabletop and housewares grew 3.3 percent and 2.7 percent, respectively, up from their scant 2014 growth of 1.4 percent and 1.6 percent. Textiles was the most challenged category in 2015, with sales up only 1.7 percent.

In terms of category sales distribution, furniture’s strong sales yielded a gain as it now represents 56 percent of total home sales, up from 55 percent in 2014. This came at the expense of the housewares category which lost a share point, down to 22 percent. All other category share remained the same in 2015.

Optimism abounds in most home furnishings categories for the next several years for all the reasons mentioned, and also due to the demographic shifts taking place.

On the retail front, it is clear there are dynamic shifts taking place as department store sales declined 3.6 percent in 2015 to $7.79 billion, while nearly every other retail category saw sales increase between 3.1 percent (discount department stores) to 12.4 percent (online). No surprise that online retailing is gaining traction as all operators ramp up their omnichannel strategies to more effectively compete with the likes of digital pure plays such as Amazon, Wayfair, Overstock and Hayneedle, to name a few. Traditional furniture retailers were second in sales gains in 2015, rising nearly 7 percent, second only to online sales growth.