HFN State of the Industry for 2017 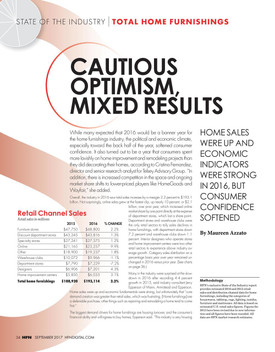 HFN State of the Industry for 2017

Originally printed in the September 2017 issue of HFN

While many expected that 2016 would be a banner year for the home furnishings industry, the political and economic climate, especially toward the back half of the year, softened consumer confidence. It also turned out to be a year that consumers spent more lavishly on home improvement and remodeling projects than they did decorating their homes, according to Cristina Fernandez, director and senior research analyst for Telsey Advisory Group. “In addition, there is increased competition in the space and ongoing market share shifts to lower-priced players like HomeGoods and Wayfair,” she added.

Overall, the industry in 2016 saw total sales increase by a meager 2.2 percent to $193.1 billion. Not surprisingly, online sales grew at the fastest clip, up nearly 10 percent, or $2.1 billion, over prior year, which increased online market share by one point directly at the expense of department stores, which lost a share point.

HFN’s exclusive State of the Industry report provides estimated 2016 and 2015 retail sales and distribution channel data for home furnishings, including the categories of housewares, tabletop, rugs, lighting, textiles, furniture and mattresses. All data is based on estimated U.S. retail sales figures. Figures for 2015 have been revised due to new information and all figures have been rounded. All data are HFN market research estimates.