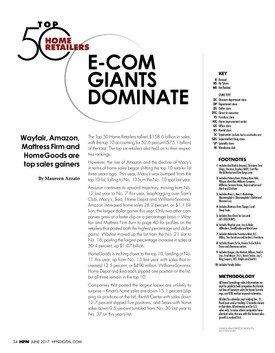 Originally published in the June 2017 issue of HFN

HFN’s exclusive survey of the Top 50 Home Furnishings Retailers ranks the top U.S. retailers by 2016 home furnishings sales. The 2015 estimates have been revised due to new information.

The ranking crosses all formats of retailing, and companies are classified by their primary channel of distribution.

Furnishings categories such as furniture, mattresses, decorative accessories, home textiles, tabletop and housewares are included in the sales estimates. All home furnishings sales—except for publicly held companies that break out line-of business sales for home furnishings—are HFN market research estimates. Sales figures are given for the 12-month period ending closest to December 31, 2016.

Sales estimates are based on information from a variety of sources, including the companies themselves, public company filings with the Securities and Exchange Commission, discussions with industry analysts and suppliers, and published and unpublished reports, including newspaper articles in various retail trading areas. This ranking does not represent the entire industry. More than the 50 retailers listed are vital companies within the industry. HFN chooses not to include some companies due to lack of verification of sales figures.