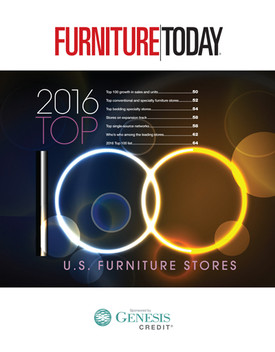 Originally printed in the May 16, 2016 print issue of Furniture Today

The nation’s largest furniture store chains combined for their biggest sales gain in 16 years last year, outpacing their smaller store counterparts and once again boosting their share of the overall furniture store market.

Furniture/Today’s Top 100 U.S. furniture stores posted an 11% increase in 2015 furniture bedding and accessory sales, growing to $41.87 billion. That’s up from $37.71 billion for the same companies last year and better than the combined $37.05 billion for the Top 100 companies on last year’s list (which was up 8.3% from the year before). It was the sixth consecutive sales gain for the list and the first double-digit increase since 2000.

To qualify, a store must specialize in home furnishings. Sales from furniture, bedding and accessories must account for 25% or more of total sales and at least 25% of those sales must come from brick-and-mortar stores. A store’s mix may also include electronics, appliances, flooring and other home furnishings.

Retailers with a broad merchandise mix, such as department stores, mass merchants and warehouse clubs that operate separate home furnishings stores are eligible for the Top 100 based on sales from their free-standing home stores only. Macy’s is ranked based on the sales from its dedicated furniture stores only.

Stores may primarily sell overstocked items, factory closeouts and one-of-a-kinds, such as The Dump and American Freight, but not primarily sell furniture that is rented or has been previously owned. Furniture/ Today will include retailers that lease or rent furniture on its Top 25 Furniture & Bedding Retailer ranking, printing in August.

For totals and market share calculations, any overlapping or double-counting of sales volume and store counts is eliminated for those Top 100 that operate single- source stores, such as EBCO, which operates La-Z-Boy Furniture Galleries.

Year-to-year comparisons are made to the same group of Top 100 companies ranked in both years. In cases of stores with identical 2015 sales, the company with the faster sales growth earns the higher rank.

All sales figures are Furniture/ Today market research estimates, unless these figures are reported specifically to the Securities and Exchange Commission. All estimates are for the 12 months ended Dec. 31, 2015 and 2014 , unless otherwise indicated. Estimates are based on information collected from surveys sent to retailers and from a variety of other sources, including company filings with the SEC, discussions with industry analysts and suppliers, and published and unpublished reports, including newspaper articles in various retail trading areas.

This ranking is by no means comprehensive and does not represent the entire industry. More than the 100 furniture stores listed are vital companies within the industry. Furniture/Today chooses not to include some companies due to lack of verification of sales figures.